The words this week are 'I wish more people were fluent in silence' Ingrid was known for saying the first thing that came into her head and today was no exception. The two girls had just come back from a school reunion, which Anna had really enjoyed. She had met up with some of her old friends and had a good catch up on old times. They hadn't been to a reunion before and didn't know if they really wanted to go, as they hadn't kept in touch with any of them. They managed to get round to most of them, carefully avoided any that might be a problem. Ingrid was in full moan mode and Anna left her to it. Anna was going round to find out what careers her old friends had decided on and had they got married, had children, and where they lived now. Anna was really enjoying herself and wished she had gone to more of the reunions. Ingrid on the other hand was grumbling about everything, as were some of the others. When Suzanne and Ingrid finally left and went for a coffee they discussed the evening at the reunion. Anna loved it and said so. Ingrid wished she had never gone and hardly had a good word to say about any of the girls. After listening to Suzanne going on for about half an hour Anna had had enough and said "I wish more people were fluent in silence" Anna doubted whether Suzanne realised that it was aimed at her. 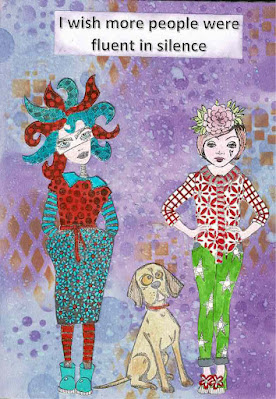 Great figures today, and I love that dog. Is the other woman a Dylusions figure. They work together so well. And perfect for Neet's challenge. Thanks for joining again this week. Great story also. I hope you are having a super week Wendy. Hugs-Erika

Wonderful journal page and story, and that quote is great! Thanks for linking to AJJ, too. Hugs, Valerie

I love the face of the character on the right - I don't have that one - it's normal for Dyan.
Lovely background and the dog is so cute sat there listening to what is going on. I wonder what he thinks?
Hugs, Neet xx

I so agree. LOL

I thoroughly enjoyed the story of the girls at the reunion. I know friends like that, and I fear I have been like Suzanne a few times myself. Thanks for this fun entry at Art Journal Journey using Neet's theme. I love how you colored those girls outfits.