Another tag for Go Tag Thursday on the theme of tickets. I have used a large travel stamp for the background and a die cut for the globe. I then added various stamped and real tickets. 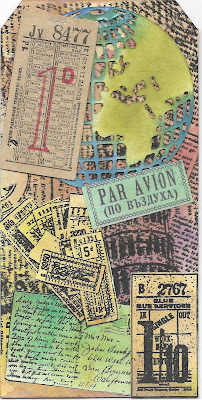 Tickets are the theme on Go Tag Thursday, and I have made a travel tag with various tickets from my stash and an Eiffel tower brad.
The background is distress inks 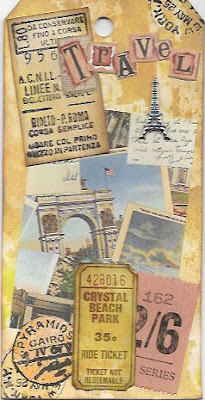 This week it's portraits, oh dear, not my favourite subject but one I need to practice on. In 2011 I started a 'face' journal. There are four faces in it, which means not even one a year.
For this week I started with the large one and there must be ten layers of paint on her face as I just couldn't get it right. The other one is a quickie after I had given up on the other one. Embrace your mistakes you are told, so here they both are, mistakes and all. I must practice getting the eyes right, they always seem to be staring. The bottom one's face is too long and she looks a bit surprised to find herself in my Dylusions journal, my other one is very small, you know the one with the four faces in.
The backgrounds were already painted, and are adjacent to each other.
Off to see what Neet has done. 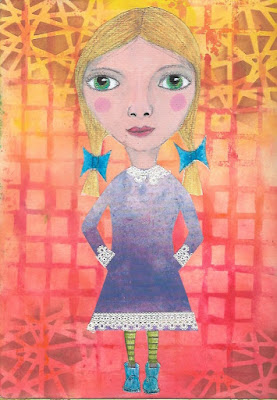 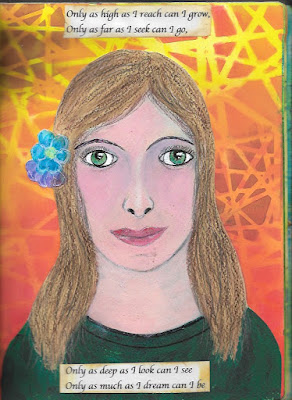 I started this 3D embroidery with Sheila Davies at Celyn Textiles. It only measures 3"x 3" and is completely addictive. I loved using some of my lovely beads and the whole process of working on such a small scale really appealed to me. I've set it on a block of oak. I will show you the green one later. I now have small boxes with the different colours threads and beads ready for all the other colours. 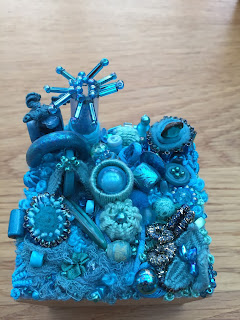 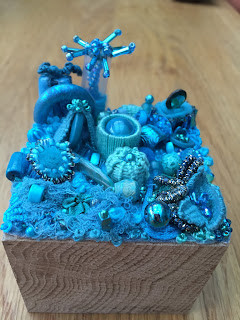 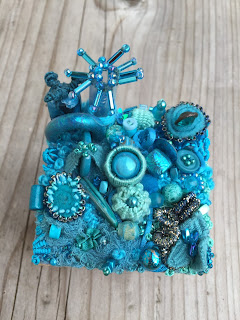 As lovely as butterflies are it was not a good idea to make one with wire, cover it with organza and then embroider on top. Fiddly does not cover the problems I had with it. It doesn't look very good on the scan, and only slightly better in real life.
This was after we had spent 4 1/2 hours trying to get home after trip to Derbyshire. It took us 1hr and 50 mins to get there and all that time coming home due to someone trying to jump off a bridge on the M40. We were not on that motorway but everything was then sent to the M42 which was the one we were on. We were really stressed out and were drinking hot milk and honey at 4 am and watching an episode of New Tricks.
Back to the inchies, the stampbord one is made with friendly plastic, which has unfortunately been discontinued in the lovely coloured form. You can only get it in pellets which you have to colour yourself. Added to all the above my scanner refused to speak to the computer, so I had to sort it out. Luckily for it, it's too high up for me to kick 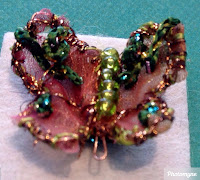 OK what has happened to the week, where did Thursday go. Neet has just phoned and asked if I had forgotten to do my journal, no I said I'll just go and put it on. I did wonder why she had phoned as often it doesn't get finished and put on until after lunch. Neet then informs me that it is actually Friday today.
This week the theme is masculine. I have used a previously painted page and then used a couple of  masks and black paint to blank out some of the background. I have used lots of vehicle stamps for the "boys toys" 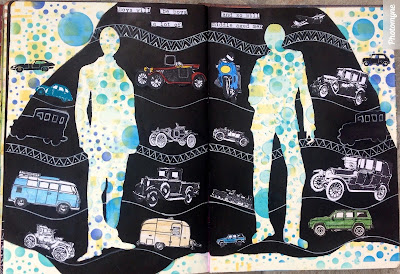 Go Tag Thursday -- Use pink, a little or a lot.

I am not usually very happy using pink, but I enjoyed doing this one for Go Tag Thursday.
I used some pink backing paper and two vintage images. I then added some lace, buttons and some thread.

On Tag Tuesday Wilma has chosen Heritage as her theme for the next fortnight.
I have made a very large tag which I used texture paste on for the background, with some Paperartsy infusions on top of the texture paste, which I then sprayed with water.
The smaller tags are of my relations, who all grew up in the valleys of South Wales. My mum's dad pictured on the top with my Nan and my mum's two older sisters.  The one below shows him on a camel ( the middle one) in Egypt ( Pyramid and Sphinx behind them) during the first World War. He also fought at Gallipoli.  He was as was my other Grandfather a miner.
The smaller of the two added tags is of my Great Grandparents with a backdrop of a mine and below the little town where my father was born and where my Grandma lived.
My brother and I used to love going up the mountain behind Grandma's house as the mountains were actually moving in as they were all undermined with coal mines. We were fascinated by the fact that the houses on the mountain were gradually being knocked down by the mountain as it moved slowly towards them. 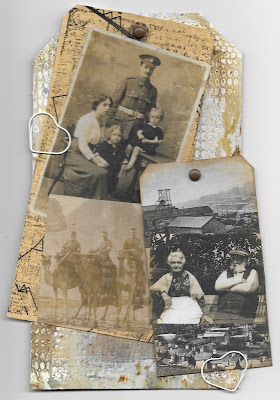 A second tag for Go Tag Thursday on the Easter Spring theme. The stamp is from Stampotique and I think the hare is called Harold. He is hoarding a basket of Easter eggs made from a flower.
The small tag at the top has a hare looking at the moon.

My computer crashed on Saturday, and this is the first time I been able to use it again. OK machines when they work, and how lost are we when they don't.
This week the theme is ladybird, lovely little insects as long as they don't bite, and sometimes they do. My stampbord one is shrink plastic, and the sewn one fine leather with hand stitching.

The theme for this week on Go Tag Thursday is Easter/Spring. I have used a combination of Distress oxides and Distress inks for the background and silhouette stamps for the hares and rabbits.. I added some flowers for some dimension, and a small tag at the top. 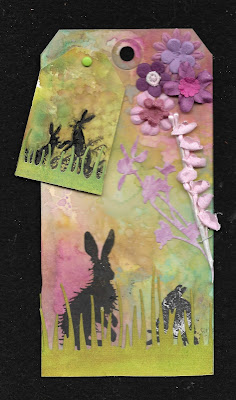 I am also entering this on Ike's Challenge which is anything goes with the option of Easter or Spring.
http://ikesworldchallengeblog.blogspot.co.uk/2017/04/ikesworld-challenges-86-anything.html
Posted by WendyK at 19:58 10 comments

This week the theme is squares,  not sure about this one. It sounded easy before I started and I just went for the first thing that came into my head. The page was already inked so I was pleased to be able to use it up. A lot of these pages were inked on the course with Dyan, so were really experimental.  I cut out a stencil with my sizzix and used brown paint for the squares, some of which are a bit wobbly. I used Dyan's stamps for the figure.
I'm sure a lot of us remember some of the pointless maths they taught us at school. How many of us have needed to find the square root of a number. Come on admit it if you have. 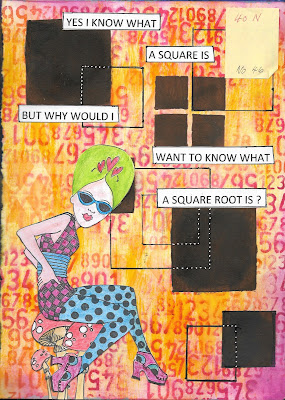 Another bird again this week and it's the crows turn. The stampbord one is shrink plastic and I have given it a Halloween background. The sewn ones loads of stitches, and looks it bit down in the mouth and moth-eaten. 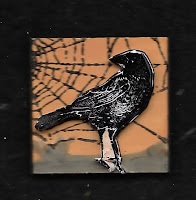 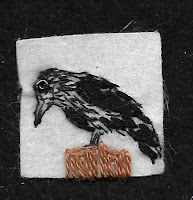 This week on Go Tag Thursday the theme is stamp it, where you can use rubber stamps or use real stamps for your tag.
Mine has a background of distress oxides and stamped flowers from Tim Holtz.

I am also entering this in Ikes'sworld challenge which is Easter/Spring flowers.http://ikesworldchallengeblog.blogspot.co.uk/2017/04/ikesworld-challenges-86-anything.html 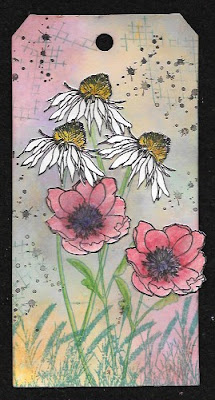 This week I am doing the one Neet did last week. From now on we should be working off the same list.  I am late doing this as I have left it till the last minute. Why, when I know what the theme is do I always leave all the challenges until the last day, or in some cases well after the day it was due.
I struggled a bit with this as it is such a broad subject, and you end up with too much choice.
The page was already stencilled and was the only one I had left that was suitable. 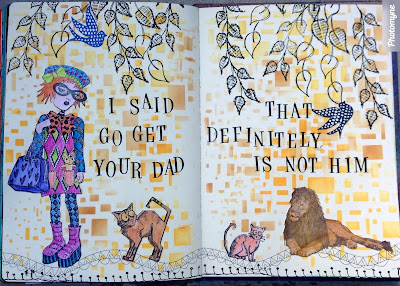 Susi suggested once again that I link this to Art Journal Journey where the theme set by Hazel is Magical Mystery Tour. I suppose the cats must have gone to a zoo to find who they thought was their dad.
Posted by WendyK at 14:16 11 comments

I am scraping in, on the last day, with the Stamps and Stencils challenge of Chirpy, chirpy, cheep, cheep. I thought I might as well put in a few more tags for my bird shaped tag book.
The tags are double sided, and are a mixture of collage and stamping. 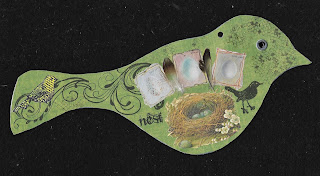 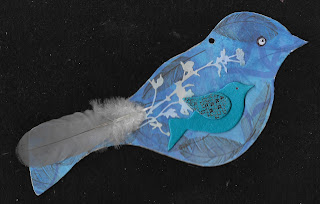 This week the theme is Things with wings on Tag Tuesday chosen by Joan. No birds this time, as that was the last theme. This tag is corrugated cardboard coloured with Gelatos. The images are stamped on separate card and the wooden butterfly buttons added afterwards. 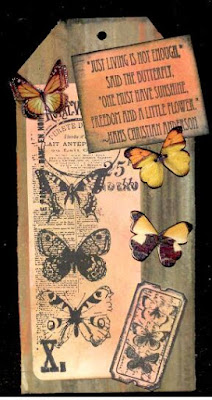 This week, it's another bird. This time it's the parrots turn to get on the inchie. My stampbord one is shrink plastic, and i have managed to get two of them on.
The sewn one has black fine leather for it's beak and the rest is stitched. I was going to make this one 3D, but ran out of steam. 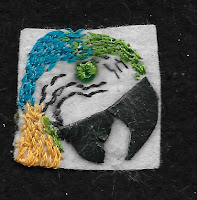 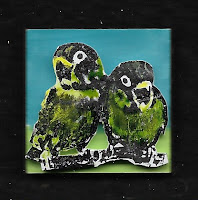