This month we are using the technique and style of Anne Kelly. I must admit I didn't know her work until Annie went on a workshop with her and then showed me her sample. It is the style I used on the front and back covers of my woodland book. This is the one I have made for Annie. 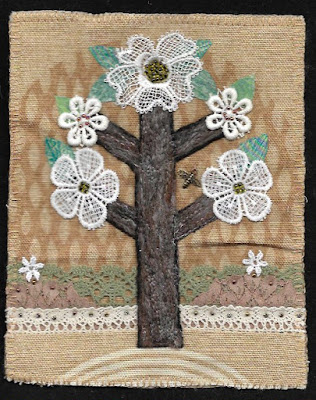 This week Neet chose the theme which is pink and lilac and the word is silhouette. It was a great change to do something in pinks again, as it's not a colour I use that often. I made my background with Dylusion paints in rose pink , laid-back lilac and crushed grape. I used several stencils with the same colours.I then used Dylusion masks for the two figures and used my third colour which was black. I die cut the dog and used the negative  for a mask. 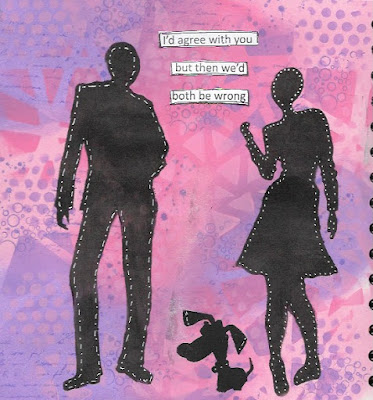 These are another two pages for my Hilary Beattie type pages. 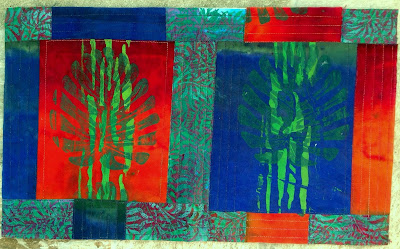 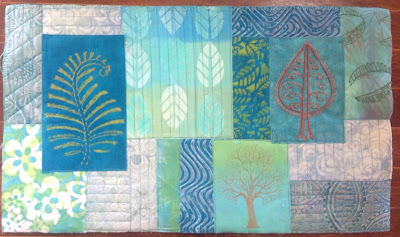 Tag Tuesday -- Anything goes, to include some lime green

It's my turn to choose the theme for Tag Tuesday, and with Christmas fast approaching I hope the theme of 'Anything goes' will make life a little bit easier for all the folks entering the challenge. Lime green is one of my favourite colours so I would like you include some of the colour on your 'anything goes' tags.
Of the two I have made one is family orientated and the other has lots of layers and textures. On the family one, I think the middle girl is my mum, and the lady behind her my Nan. I really am not sure, and there is no-one left to ask. What a shame our ancestors didn't write on the back of photos to say who they are. 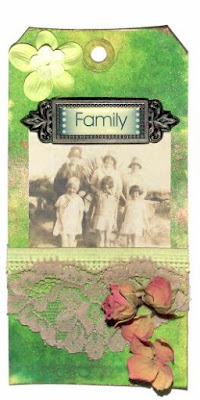 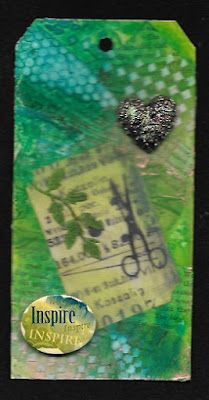 I really hope that these will be the last turkeys I ever have to draw or sew, what a nightmare. The fact that they are ugly and I don't like eating them didn't help. I came down to my studio yesterday to get on with them and ended up making some Christmas cards instead. The fact that I didn't want to make cards either shows how reluctant I was do do these turkeys. The top stampbord one is the original. and as I didn't think it looked like a turkey I then altered the bottom bit of it and there you go another one that doesn't look like a turkey. As I only have four pieces of stampbord left I can't do another one.

We had the grandchildren here for the weekend, and I helped them make Christmas cards. That sort of made me realise that I only had six left over from last year, and I really should make an effort.
All the kids wanted to do was use the rubber stamps, and get covered in ink while they were about it. So I left everything out and did some stampings myself, and yes I ended up all inky as well.

After going on a course with Hilary which was fabulous, fun and informative, I was a bit addicted to making more pages than the two I made on the course. I have made seven in all and a cover for the book. Each page is a double spread and boy am I having fun and games putting it together. I will show you the finished book once I have achieved something resembling a book, and not a pile of collaged fabric.
All the pages are hand printed and dyed, with some machine quilting and hand embroidery.
Here are two of them. 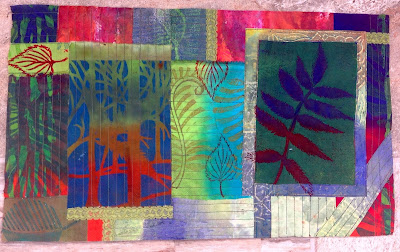 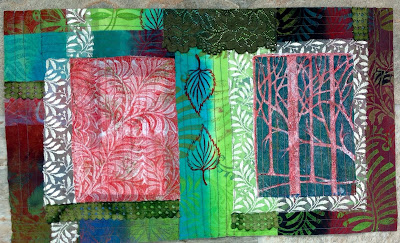 Chris is the host for Art Journal Journey this month and has chosen '101 ways to keep warm'
I have been so busy that I have put this to one side for weeks.
I have used one of my favourite pictures of two little boys dressed up to keep warm in the snow. The background is distress inks with Paperartsy Infusions sprinkled on top. The trees are a Tim Holtz die cut pine tree, with some puff paint for the snow. 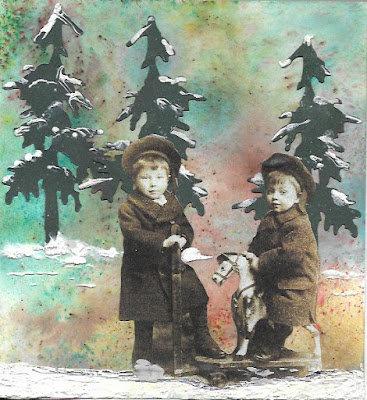 My second tag for Michele's theme of music on Tag Tuesday This time I covered the tag with some blue music  background and added the picture of the lady playing the harp. Some napkin and flowers finished it off. 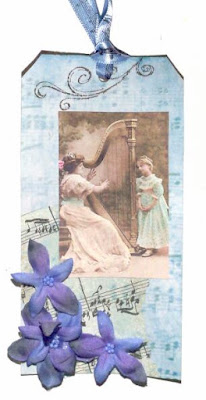 This week on Every Inchie Monday we feature the hedgehog, the gardeners friend. I just wish I had lots in my garden to eat all the slugs. I have drawn the stampbord one and hand stitched the sewn one. I will really miss doing these when the site closes at the end of the year. I shall try to do some sewn ones for the years I only did card or stampbord ones.

My turn this week to choose the colours and words. I have chosen turquoise and lime green, no surprise to those who know me, with my third colour, coral.  The word is mermaid. As soon as I started this I wondered why on earth I had chosen mermaid. All my Dylusion figures were too big, so I used a friends stamp and stamped a mermaid. Neet and I had decided where possible to use Dylusion stamps and I had made a mermaid with one of the heads and a body of another one. I made up a tail and used silk for the hair. It just about filled the page, so hubby who isn't a bit interested in what I was doing said " why don't you photocopy it and reduce the size. So that is what I did.  I have also used the stamped one. I die cut some seaweed and stamped and embossed some more. A few stamped fish and shells and I was finished.
Note to self: Think before coming up with a wood that is too much of a challenge.
I wonder what Neet will choose for next week !! 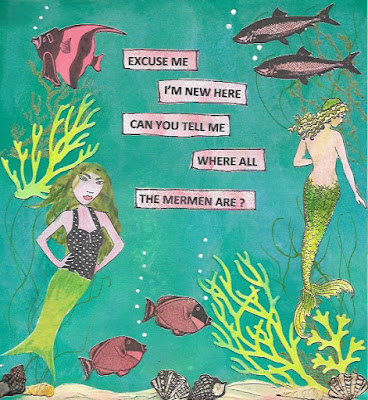 These are the two other 8' x 6" pages that I made at the same time as doing the one for Annie. I will probably use these on the cover when we have finished doing all the pages, in other words in eleven months time. Note to self, put them somewhere I can find them next October.
All the fabric on these pages including the large ones are all hand printed and dyed ( procion dye or paint), either on a gelli plate or with Indian wooden blocks or stencils. 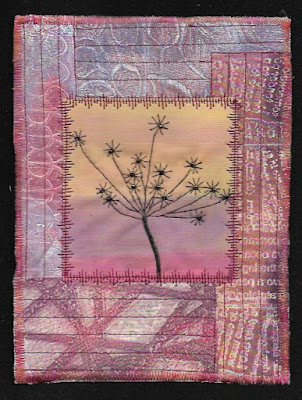 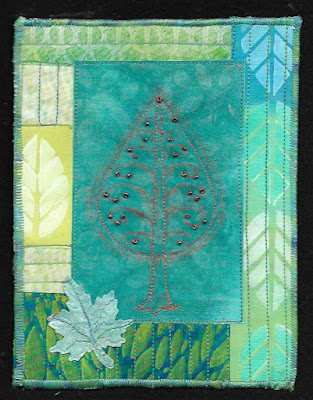 Michele has chosen music for the theme this fortnight on Tag Tuesday. I have very little in the music line in my craft stuff, so didn't find this very easy. For this one I used a distress inked background and pasted some napkin and music onto it before adding the ballerina. To finish off I stamped some piano keys and musical notes.

Goose is the theme this week on Every inchie Monday. My stampbord one is drawn and coloured and the sewn one is all stitches. The goose is something I have never wanted to own, ducks we had but geese are so noisy. They make very good guards as they let you know immediately when someone is around, that is if you can put up with their aggressive attitude as well.

This is my second one for Sandie's theme of Book Print on Tag Tuesday. The background is distress inked and then the book print added. I then adhered the leaves from the garden with acrylic wax top and bottom, which should preserve them.
I added some flowers and wooden words to finish off. 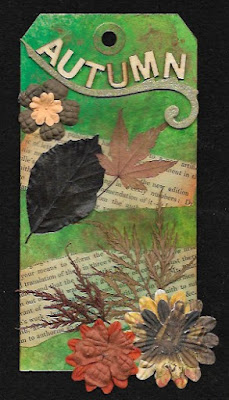 Annie and I have stopped doing the postcards now and have embarked on a small fabric book. This will take the form of us trying a different page every month on the technique and style of textile artists we like.
The first one is Hillary Beattie whose style we like a lot. I have made several of them so far and will put them on my blog later. At the moment I am trying to figure out how to bind my book together aa it does not lend itself to a normal binding technique.

This the one I made for Annie. 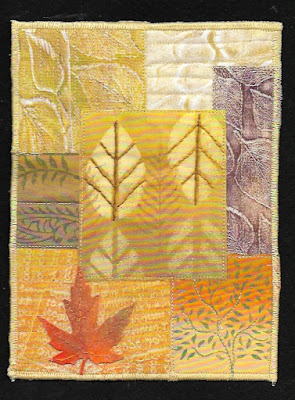 This week the theme was chosen by Neet and the two colours are orange and red with a third one of your own choice. The word is Autumn.
I have chosen brown as my third colour and have use a Dylusion tree for the main image. The dog and cat stamps are a mixture of Dylusions and Tim Holtz.
The paint I used is also Dylusions. 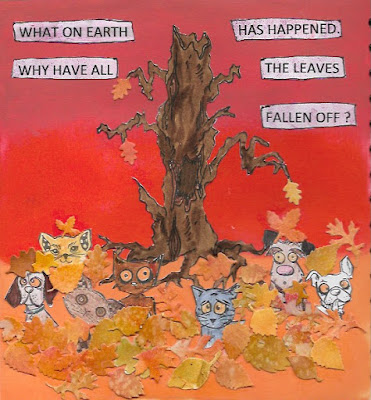 A lovely one to do this week as I love owls. My stampbord one is shrink plastic and the sewn one, hand stitches to simulate feathers. It's on a felted background.
I am away for the weekend until Tuesday so this is a scheduled post.

This one was made with the help of texture paste through a stencil, and a build up of fabrics onto the top of the substate fabric. Puff paint was then added around the added pieces of fabric to hide the edges, and the whole piece was covered with black chiffon sewn and then melted with a heat gun. I added some hand stitching and beads to finish off. 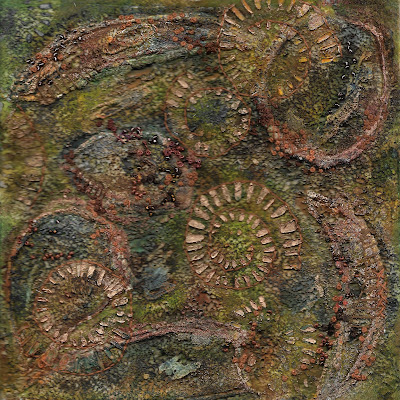 I want to do this piece again, as I now realise how I could improve it, especially the colours.
Posted by WendyK at 00:24 2 comments

We are now on a new journal, which measures 8" x 8" and we will choose a new subject each week with a limited colour scheme. We have started off with Halloween, which will remind us when we started it, and kick start the new journal.
I thought I would like the smaller size, but now I'm not so sure. I found it harder to compose than the larger size, and many of my Dylusion stamps are too big for this size.
The colours this time are orange, green and black. 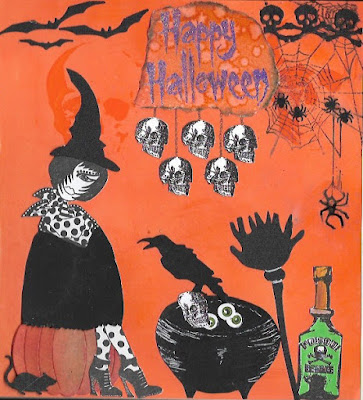 When I went to my friends for a few days we had a session of trying different techniques with fabrics. The first one is layers of fabric sewn down in lines and then slashed between the stitching. The second one the stitching is in vermicelli stitch and then melted with a soldering iron. and the fabrics are sheers that melt, like organza. 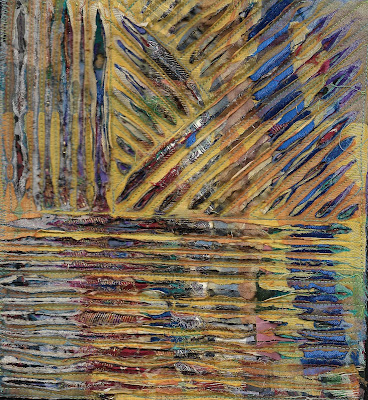 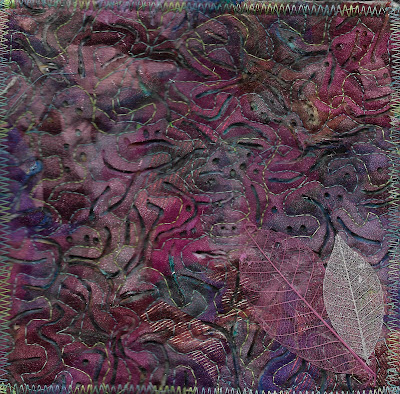