This is the last challenge on Go Tag Thursday as Sandie is closing it down, as not enough people enter the challenge. She has worked so hard and I am very sad to see it go. I love making tags.
The background and leaves are coloured with distress inks, and I have added some brads and leaves at the base. 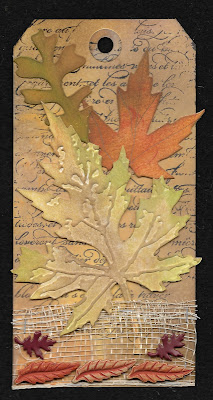 This is the last but one page in my large journal, after this we are going to work in a smaller format, a 8" x 8" journal, but still using our Dylusions.
I must admit doing an anything goes theme I am running out of ideas. but the weather today gave me the idea for this page.
The page was already painted and stencilled. 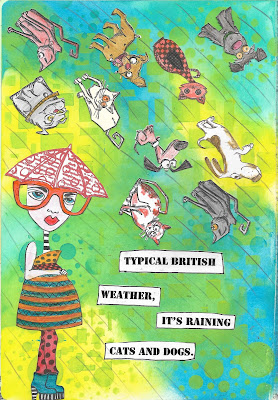 I am also entering this in Yvonne's colour my world on Art Journal Journey
Posted by WendyK at 08:30 6 comments

This is my second tag for Joan's steampunk theme on Tag Tuesday. I used a distress inked background and added some stamped and printed images. Cogs finished off the tag 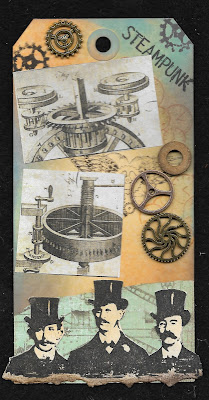 Now I definitely didn't like doing this one, I even had trouble drawing one. The sewn one is a piece of fine leather rolled up, coloured and curled up. Once the colours had dried on the stampbord I coated the snake in a 3D glossy medium, which has made the markings blurred.  Not very pleased with either of these.
I hadn't realised how many colours they came in. Why on earth do people have these as pets ???? 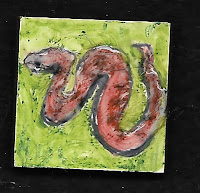 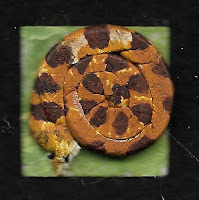 For this fortnight on Tag Tuesday, Joan has chosen Steampunk for her theme. I do enjoy doing steampunk and started with distress inking the tags. I then stamped the backgrounded the main image. I then stamped another one and put foam pads underneath to lift it.
Finally I added some cogs and some steampunk bits. 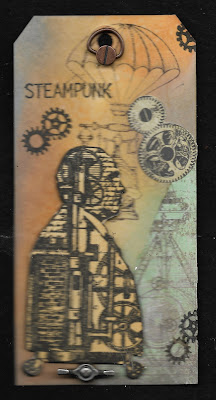 Another anything goes page in my now nearly full journal. We are back from St Ives and Ploughing through the washing and unpacking. Where does it all go, and did I really take all those clothes.
We had a great holiday, even though the weather was a bit iffy.
Came home via Devon to see one of my cousins, and then had to get home via Wales as the M5 was shut because of a terrible accident.
I have used an already painted page, and apart from the saying, cat and dog they are all Dylusion images. 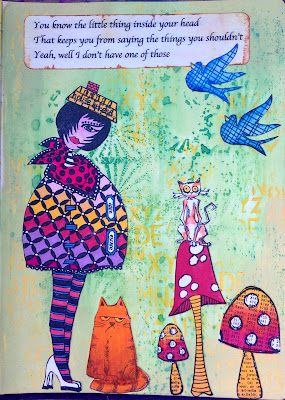 I have entered this in Yvonne's Colour my World on Art Journal Journey
Posted by WendyK at 10:00 6 comments

On Every Inchie Monday this week we are still in the water with the trout. I like eating them but not sewing them, talk about fiddly. I have drawn the stampbord one and used some fabric and stitching for the sewn one.
I have had a very fishy week in Cornwall, I ate fish all week, including Hake, Haddock, Sea Bass, Sea Bream, Squid, Prawns and Lemon sole. We are now back home and I'm cooking a chicken.
Still on the Cornwall scene, we were in St Ives and one of the beaches for two days the life guards stopped folks going into the sea. Not because of the waves, but because there were hundreds of Man of war jellyfish in the bay. They had picked up 600 from the beach alone. 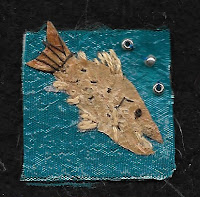 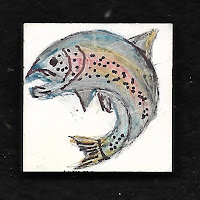 Another anything goes this week and this is a scheduled post as we are in St Ives in Cornwall. We are having another arty week and I am catching up with a friend who has an exhibition there. 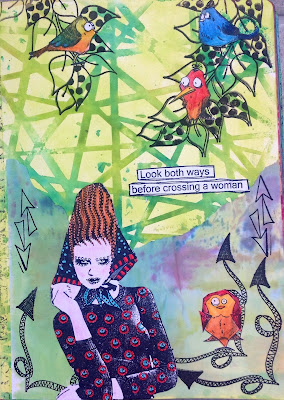 I am also entering this in Art Journal Journey where the theme is Colour in my world.
https://art-journal-journey.blogspot.co.uk/2017/09/colour-in-my-world.html
Posted by WendyK at 08:00 6 comments

This is my third tag for my Paris theme on Tag Tuesday, I covered a card tag with some of my Tim Holtz paper and stamped the small tag and the dancers. The line drawings came from a book. Added two small circles  and some flowers to finish off.
We are in St Ives at the moment, and so far have been lucky with the weather, I will put some pictures on when we get home. 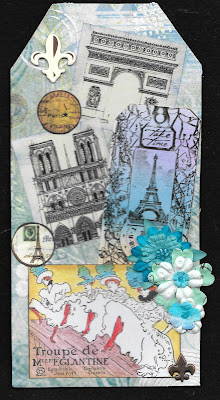 Still at the seaside on Every Inchie Monday, and this time it's the starfish, or as someone told us in Australia, they should be called sea stars, which I think is a much nicer name.
I used my lovely gold leather for the sewn one and shrink plastic for the stampbord one. 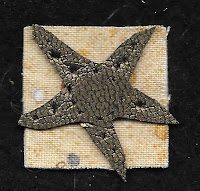 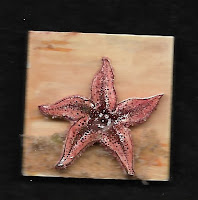 Try it on Tuesday -- Stitch it

Another entry for Try It on Tuesday's theme of stitch it.  This one is made from pieces of fabric that have been printed on my gelli plate. The leaf print is from an Indian block and over dyed with Procion dyes. I then quilted it with straight machine stitches. 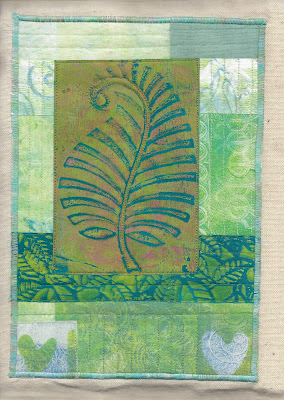 This is my second tag for Tag Tuesday where I haven chosen Paris for the next two weeks.
The base is corrugated card and I have ripped away some of the top layer and embossed it with blue powder. I then added all the images, ribbon, and a brad of the Eiffel tower. 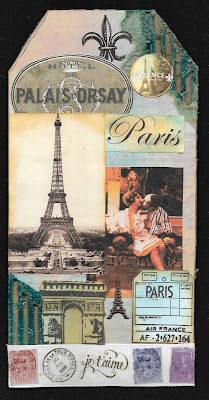 Try it on Tuesday -- Stitch it

Try it on Tuesday has the theme of stitch it. Just up my street as I am making a fabric book at the moment. Here is a page from that book. It is made up of scraps of fabric, sewn down with machine embroidery stitches. I stamped the owl onto fabric and embroidered it, and placed it on some tree branches made from fine corduroy 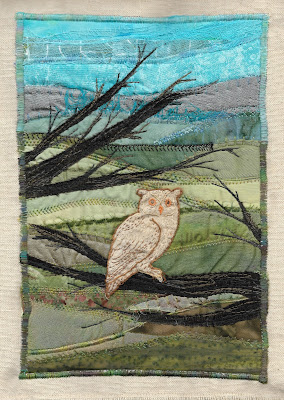 Another anything goes this week, and mine was a last minute make. I used two of Dyan's Dylusion figures for the images. In fact part from the quote, everything is Dylusions.
I am in a lot of pain with my leg, and the new pain killers are not touching it, just making me light headed.  We are away next week as well so I must get on with the next one. 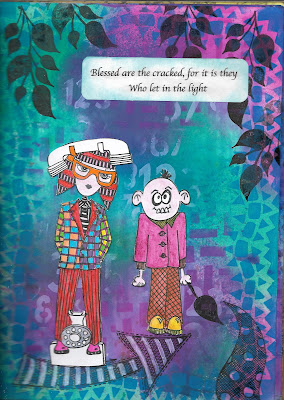 I am also entering this in Art Journal Journey, where Yvonne theme is Colour in my world
Posted by WendyK at 10:21 7 comments

It's my turn to host on Tag Tuesday for the next two weeks, and I have chosen Paris. My first tag has a base of card which I have inked and then proceeded to cover it up with images, and it was really pretty. I love the image of the Eiffel tower with the view through, and have based the rest of the tag on romance, as that what a lot of us associate with the city. I added some lace and flowers to complete the scene. 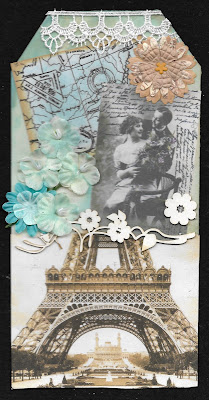 This week we are still at the seaside with the crab. My stampbord one is shrink plastic and for the sewn one I used some leather with hand stitching.
When we were on the Isle of Skye last week we found a lovely quiet beach and I found a few lovely crab shells that managed the trip home without breaking. Luckily the crabs were not at home.
I have some hermit crabs in my marine tank, and two of them are covered in long green algae, so they look like hippies with long dyed hair. Perhaps I should have used those for my inchie. 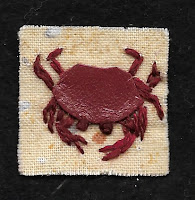 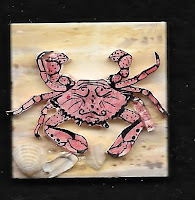 Crab shells from the beach. 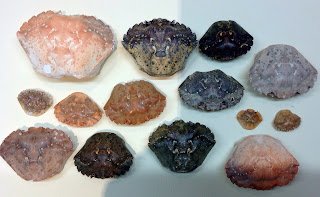