Another tag for my theme of blue/green on Tag Tuesday This time with a textured background and die cut leaves in fabric and paper. 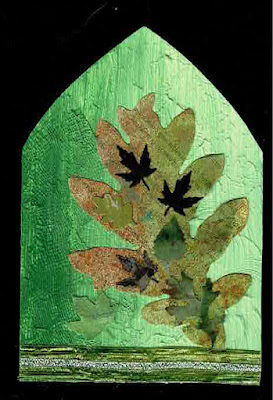 The words this week are ' Don't judge me' On  Tuesday evening I was doing some colour theory and had some red paint left over. Rather than waste it I brayered it onto a blank page In my art journal calendar book. How lucky was that when on Wednesday morning I found that Erika had chosen the colour red for her theme on Art Journal Journey. I took a copy of it and pasted it onto my journal page for today. I will try and use it for another entry for AJJ later in the month.  Jo had invited her friend Tracey round for a drink and to see her new flat. She had been so pleased with her first attempt at decorating and was looking forward to see what Tracey thought of it. Tracey having said what a nice district it was then asked Jo what she had put the paint on the wall with. Jo thought that was a stupid question and said a paint roller of course. Tracey then went on to explain that she didn't have enough paint on the roller and it was best to kept it going in the same direction, not all over the place with uneven covering like Jo had done. Well I like it said Jo, don't judge me. While she was on a roll Tracey then mentioned the purple ladybird on Jo's head and the very colourful cat that looked as if it had been painting as well. Tracey dreaded to think what furnishings Jo was going to choose to go with the wall. Well if you like it, then that's good said Tracey hoping that that would rectify her comments.

I an linking this to Erika's theme of Seeing Red on Art Journal Journey. The words sort of go with it as well this week. I think I would see red if someone criticised my decorating.https://art-journal-journey.blogspot.com/2023/02/seeing-red.html 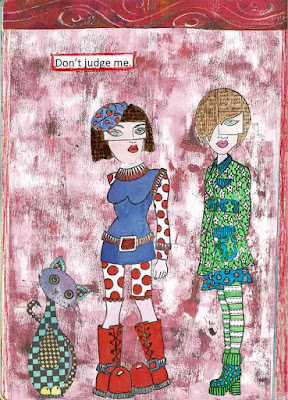 The Snarky words this week are 'Relax, we're all crazy. It's not a competition. Freda and Shirley are best friends and spend a lot of time together, talking about boyfriends, parents and everything that's going on in their group of friends. Shirley has just recently broken up with her boyfriend Gary who was a lovely sensible lad with a good job and great parents. They had had the silliest of rows about where to go on their holidays, and they were both so different they just couldn't agree on one they both liked. In the end Shirley had called him selfish and thoughtless and anything else she could think of. She really did like him a lot, and having rushed into a totally unsuitable relationship afterwards, now realised how crazy she had been. She now had the unenviable taste of not only finishing the new relationship, but to go and apologise to Gary and hope he would take her back. Freda then launched into her family grumbles, and said I can beat that . Look at the photo of my grandparents on the wall. They are in a boat without an engine, paddles or anything to steer with, they are really crazy, and it might be hereditary.  Shirley listened patiently and the said to Freda,"Relax, we're all crazy it's not a competition" 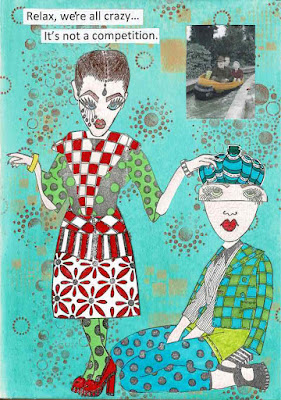 I am hosting Tag Tuesday for the next two weeks with the theme of blue and green. I have made three tags using up some of my stash. 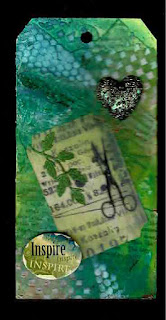 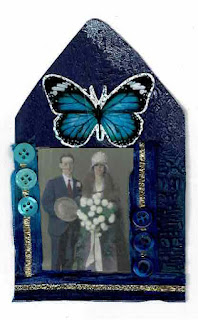 Another tag for Sandie's theme of Things with wings on Tag Tuesday to make up for being so late with this challenge, sorry Sandie. 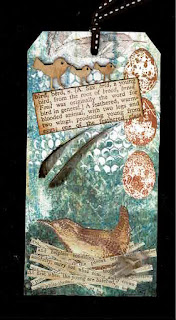 The theme set by Sandie on Tag Tuesday is 'Things with wings. I have gone for birds and have used up some of my stash. Why did I buy so much stuff ? 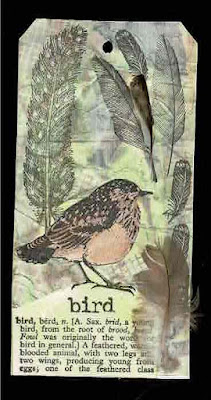 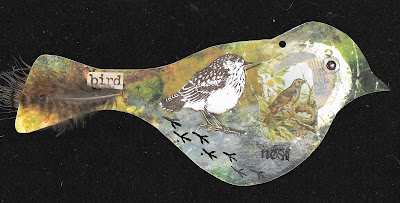 The words this week are 'I just rescued some wine. It was trapped in a bottle' Alison was having her usual visit from her mum Jenny, who seemed to think that even at the age of thirty-three Alison still needed her mum to keep an eye on her. As soon as Jenny walked in she realised her timing was perfect, there was Alison sitting on the floor with a bottle of wine on the floor next to her' What on earth are you doing her mother wanted to know. Alison had been ready for some remark and had an answer ready. "I just rescued some wine. It was trapped in a bottle" "Don't be ridiculous" Jenny said, "don't forget your Great Grandfather was an alcoholic, and if you are not careful, you will be going the same way, that's why I put that photograph him on your wall, as a reminder" I am linking this to Mia's theme on Art Journal Journey, which is 'Use a photograph' 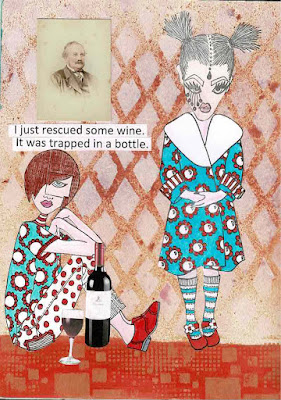