I'm on the South Wales coast this week with my son, daughter and the three Grandchildren. My son informs me it's the first family holiday he's been own since he 's been an adult. He doesn't count the two holidays we had every year in Scotland, as his grandparents had a cottage up there. 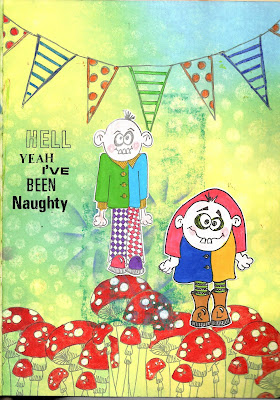 What a super page for the quote - and a great story. What a very naughty boy he has been. Such a shame he has tried to break some of the toadstools that they had erected, so pretty.
I'd say he is the type of boy you don't want around when there is something nice going on. Just so glad we didn't get to see mum's smalls on the bunting.
Love the different fonts you have used - thanks for this page linking to my theme at AJJ.
Hugs, Neet xx
ps hope you are having a nice family holiday

Fun journal page, love the colours and the mushrooms. Enjoy your family holiday, have fun, Valerie

He looks like he's been naughty. Naughty Malcolm. I really love those mushrooms. Glad you colored them red as the color really pops. Nice type too for Neet's challenge. Thanks for joining us at AJJ. Hope you have a wonderful holiday with your family. hugs-Erika

A great story and a fabulous page Wendy! I love all of those lovely bright colours.
Alison

How sad that Malcomb has to be such a bad little boy and a strong influence over Greg. You chose a lot of different fonts for the sentiment and I love them all. It's a really great way to honor Neet's theme at Art Journal Journey. Now let's hope mom gets her undies before anyone sees them and Malcomb learns his lesson at being such a bad boy.

Its another great page and story Wendy. Boys having fun and then I wonder how the story of what they were up to escalates when they tell their friends.
A fantastic page for Neet's AJJ theme.
Yvonne xx

Fabulous page! Loving those colourful mushrooms and they both look like they've been up to no good 😁. Happy and creative wishes! Hugs Jo x