The words this week are " One day I will rule the world, until then I'm going to bed" I have used an already done page for this, and I am having to do it in a hurry as I will not have a computer for a few days and can't do it all on my iPad.  Sophie has had a promotion at work and is feeling on top of the world, it was only a tiny step up the ladder, but she was really pleased with herself. She had phoned her best friend up ago tell her. Her friend had tried to tell her not to expect too much to change but Sophie replied "One day I will rule the world, until then I am going to bed" I don't think she had really meant that but it sounded very positive to her.

The theme on Art Journal Journey, set by my friend Neet is Type so I have used different fonts for the saying. 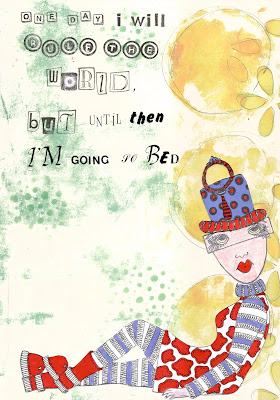 A great page Wendy, she looks as if she is really thinking with her head tilted to one side. Love the background too9.
What a lovely idea to mix the type up like that for your quote - very effective!
Hugs and thanks for linking to my theme.
Neet xx

Wonderful page and quote, and love your story, too. Thanks so much for this entry for Neet's theme at AJJ! Love your types! Hugs, Valerie

How fun your journal page is! And who can’t relate to the words. Ha! Sophie’s expression is that she doesn’t understand why her promotion is a surprise to anyone. I love the mix of fonts for the saying. Also a fun background for this piece.

I like the summer heat on this page Wendy. It feels like it me at least. And nice type too. You used some super fonts, and I like how you did that. Have a great end of the week. Hugs-Erika

Such a gorgeous page! Loving your soft background and all the different texts that you used look fabulous 😁. Happy Friday and weekend! Hugs Jo x

A super assortment of typed fonts Wendy, its a fantastic page and back storey. Thanks for linking with Neet's theme over at AJJ.
Yvonne xx

A great page Wendy, and I love all those different fonts you used!
Hope you have a lovely weekend,
Alison