The words this week are.'I don't play hard too get, I play never going to happen' Hazel and her friend  Vicki had gone out for a walk, and Vicki would insist on bringing up the subject of her brother who was in the class above them in school. He fancied Hazel and Vicki was trying to persuade her to go on a date with him. He was quite a nice lad and very clever but one thing put Hazel off. Vicki tried one more attempt, "please Hazel just give him a chance you are being really silly and playing hard to get."No" said Hazel, " he's very nice but he's a lot shorter than me and I don't play hard to get, I play never going to happen"

I am linking this to Chris's theme of When we were young on Art Journal Journey When I was in my teens my brother came home one day, (he was two years younger than me and went to a different school), with the suggestion that I should go on a date with his friend Peter who was my age. No way was I going to do that, he was as short as me ( which was in those days 5ft 1 1/2 inches tall (short) So the above story is actually based on fact. 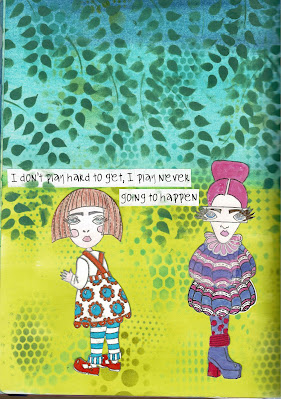 Love the way you have used a true story as the basis of your post this week. It's so easy to do and whilst my last two have been fiction there are elements of things that happened in my life. This week Damon is a different person as by this time I had moved towns and was no longer in contact with the original boy.
Wonder what we will do next week? Fact or Fiction?
Love the figures you have used, such a fab page.
Hugs, Neet xx

Love this Wendy! I can understand totally!! Thanks so much for linking to my AJJ theme, Hugs, Chrisx

Wonderful journal page and love the story. The quote is really good, too! Hope you are well, hugs, Valerie

I take it you didn't go on that date Wendy. I like your story this week, and how it's based on a real story. I always hated being fixed up, or someone trying to do that. Your page is super, and it works wonderfully for Chris' theme at AJJ. Thanks for sharing it with us. Have a great rest of your week too. Hugs-Erika

It's great that your page and quote are based on a true story of your youth. But give us short people a pass, please. I am 4 ft 11 1/2 inches tall. Enjoyed the read and a great way to share it with us at Art Journal Journey using Chris's theme, too.

I am always so amazed at your art and writings. Have a lovely day.