On Art Journal Journey this month, Chris has chosen 'When we were young' as her theme. The words to use this week for our journal page are ' So much to do, so little people to do it for me

'Malcolm and his brother Freddie have been given the task of clearing out the weeds at the bottom of the lawn and as Malcolm knows Freddie will be absolutely useless at it so it was up to him. Perhaps he could just persuade  Freddie to pick them up and take them to the rubbish heap. He had also been asked very nicely by his mum to clear the floor of their bedroom as it was covered in toys, tiny bits of Lego, dirty clothes, and empty cups and plates. The boys hadn't allowed her to go in the room as they said they were doing secret things in there. In fact it was such a mess she hadn't been able to vacuum it for a few weeks, She dreaded to think what the carpet looked like underneath it all. Malcolm was beginning to feel the pressure and had decided to tackle the weeds first. As expected Freddie wasn't being any use at all. Malcolm sighed loudly and to no one in particular said " So much to do, and so little people to do it for me" I do remember weeding my dads veg plot without being asked, the only problem was that I fed the Spring onions to next doors chickens, who probably didn’t even eat onions, not even the green bit. 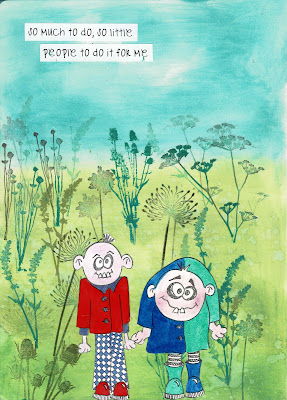 A delightful page and a delightful story Wendy. Love these two boys, I just wish we had more to play around with in the Dylusion stamps.
I just wonder how next week will go for us (smile - struggling to think).
Hugs, Neet xx (Late because I had an appointment)

Absolutely brilliant Wendy! Thanks so much for linking to my AJJ theme! I remember weeding my Dad's garden too, hugs, Chrisx

Fabulous page! I enjoyed reading the story and the way you interpreted the quote - perfect 😊. I hope you've had a wonderful week and happy weekend! Hugs Jo x

I remember being a kid and having to weed the garden. It was soooo dull, unlike now when I listen to a book and work. I like how you illustrated that quote, and your story too. It's a great page for Chris' challenge. Thanks for joining us and have a happy weekend. hugs-Erika

Oh my goodness! What an adorable page and awesome story behind it! Thanks for sharing!! HUGS!