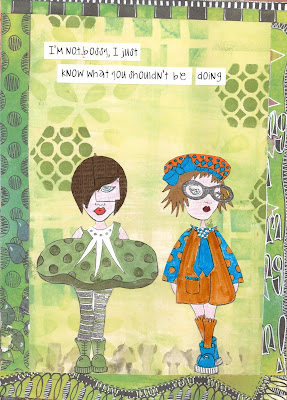 I like Jean's look. She is a little different than many of Dyan's style. But Edith, not so good to date an engaged man. Great page Wendy. Happy July to you! Hugs-Erika

Fun page, Wendy, and a good story to it. Have a great day, hugs, Valerie

This quote provided me with a bit of a headache but I wove some story around it to try to make it feasible and a bit different. Love how you managed yours. What a horrible person she is, going out with someone engaged to someone else.
Tut Tut!
Nice figures and background.
Hugs, Neet xx

Fabulous page! Loving the background and the way your interpretation of the quote 😁. Happy July! Hugs, Jo x