I seem to have found a real mixture of bits for my tag, including, a spring from a wooden peg, a nail, some crumpled up sweety foil, some rusty wire, a picture hangy thingy, a paper clip and a crisp packet that I shrank. I added one of Tim's lost and found pictures which looks as if it's been lost for some time. 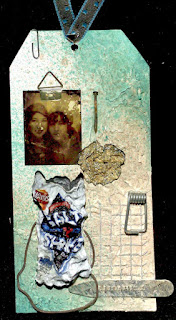 What a lovely topic to play with. It would be great to see what everyone else 'found'. Love the background of your tag and all the little bits and pieces.

Great things to find for your tag